The beautiful wrought iron door to this alcove and the hand rail was done by Horst — a very good family friend.

The wine cellar itself has a humidity and temperature level that is just perfect for keeping wine. We kept the original ceiling and used the rocks we found in this room in the walls and also to built in a step, as the wine cellar had originally a slope.

Horst found an old wine barrel which we now use as table for Wine and Schnaps tastings, or as Tatjana’s Dad would say ‘for our meetings’. 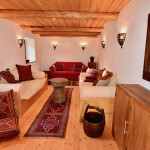 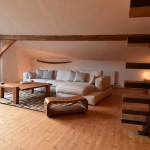